We all know that Mondays’ are generally not a good day for a lot of people, so The Rock Riff has decided to be the silver lining to your Monday blues. Here are 5 rock songs to headbang to on your drive to work or on your drive home from work depending on where you live. Get rid off all that pent-up frustration!

This song never fails to get my blood pumping, its one of my favourite tracks to come from “Fortress”, Alter Bridge’s fourth studio album. Myles Kennedy puts in some stellar vocals as usual and the band pulls the song together effortlessly.

Combine Taylor Momsen at her best, an interesting concept for a music video, a great band and an infectious chorus, the result will be “Heaven Knows”. The video has already accumulated 1,235,903 views within only 5 days, you can see why by clicking below.

I feel this song describes my state of mind on some days perfectly and what is better than a band smack in the middle of a mosh pit? Nothing, is my answer. Whenever you had a bad day listen to this song and it will make you feel better instantly!

I’ve only recently started listening to Korn (believe it or not!) and I love their recent singles that they have released off of their latest album “The Paradigm Shift”. I particularly found their music video for “Spike in My Veins” interesting, I found the video quite creepy. It depicts the messages that we are exposed to by the mass media on a day-to-day basis. The chorus is amazing and the slow-motion shots in-between the TV footage is fantastic.

A music video that might make your skin crawl, but will have you cranking up the volume at the same time. A fist-pumping chorus combined with some killer guitars and bad-ass drumming. This will give you an adrenaline injection to make you survive the rest of your week.

I hope you have a rocking week and before you can blink its the weekend, baby!

Pop Evil is a rock band which was formed in Muskegon, Michigan in 2001. The band initially consisted of Leigh Kakaty, Dave Grahs, Jamie Nummer, and Dylan Allison. The band grew out of pieces from other Michigan bands called TenFive.

In 2004 the band independently released album titled “War of the Roses” and followed the release with a 3-song EP “Ready or Not” in 2006. “Ready or Not” featured a concert staple “Somebody Like You”. The band filmed a music video for the song released in 2006 featuring Rossi Morreale and Britt Koth. Guitarist Tony Greve was added as temporary studio musician, but was later invited to become a full-time member in early 2007. Around the same time Jamie Nummer left the band personal reasons and was replaced by Matt DiRito, formerly of Archangel and Before the Fire. In November 2007 the band signed a management deal with G&G Entertainment.

The band’s official debut album arrived on the 12th of August 2008 on the indie label Pazzo Music that is distributed by Universal Music Group subsidiary, Fontana Distribution , it spawned the radio-friendly songs “Hero”, “Somebody Like You”, “100 in 55” and “Stepping Stone”.  In April of 2008 Pazzo Music released their first national single “Hero” which peaked inside the Top 25 at Active Roxk Radio. Pazzo Music released “100 in a 55” to rock radio in November 2008.  The band distributed a special edition of the album at their concert at the Intersection in Grand Rapids, MI, on May 29, 2008 free of charge. The early success of “Lipstick on the Mirror” resulted in a record deal from Universal Music. It was announced at a live show in Cedar Rapids ,  IA, on the 6th of March 2009 that Pop Evil signed with Universal Records.

Shortly after signing the band re-entered the studio to remix and remaster “Lipstick on the Mirror”. In April 2009 the band officially inked a deal with Cherry Lane Publishing. In May 2009 the band released the remastered version of the album through Universal Republic Records. The re-release was engineered and mixed by Chuck Alkazian and mastered by Chris Bellman of Bernie Grundman Mastering. The album peaked at Number 12 on the Billboard Heat Seeker chart. The single “100 in a 55” peaked on the Active Rock charts at Number 8 making it one of the longest standing singles at Active Rock in 2009. The song was on the chart for 33 weeks!

In July 2009 the band gave their fans the opportunity to choose their next single. After voting concluded the song “Breathe” was chosen to be the band’s next single. The single peaked at No. 29 on the Active Rock charts.

In January 2010 the band announced that they would once again enter the studio, this time to record their second studio album which would be produced by Johnny K.

The band’s first single off of their 2010 album “War of Angels” peaked at Number 5 on the Active Rock Chart. The name of the album signifies the struggle people experience when trying to leave their past behind. In September 2010 the band debuted the first single from War of Angels,”Last Man Standing”, in an exclusive video with UFC fighter Frank Mir. “Last Man Standing” peaked at No. 5 on the Active Radio charts.

War of Angels was originally expected to be released on the 8th of February 2011, but in a press release on the 1st of February 2011 the band announced that the album would be delayed due to conflicts out of the band’s control. In a concert in Columbus, Ohio, in 2011 the band symbolically ripped up their recording contract with Universal Music and announced a new deal with eOne Music. The same year drummer Dylan Allison had emergency surgery on his neck and was unable to perform with the band for a some time. Drummer Josh Marunde (Chachi Riot) formerly of Seraph took over his duties.

In June of 2011, the band released their second single from War of Angels called “Monster You Made” and the band filmed a music video for the song shortly after. “War of Angels” was released at long last on the 5th of July of 2011 on eOne music. The album was also released as a Deluxe Edition with 4 Bonus Tracks available only on iTunes and at the band’s live shows. It reached Number 43 on the Billboard 200 Albums Chart and Number 8 on the Rock Albums Chart.

Over the course of 2011 the band toured with Drowning Pool, Trust Company, Anew Revolution, Papa Roach, Finger Eleven, Escape The Fate, 3 Doors Down, Theory of a Deadman and Puddle of Mudd.

The band is big fans of the Michigan Wolverines football team , Pop Evil released a single “In The Big House”, the song title refers to the unofficial name for the Michigan stadium. The name refers to its status as the largest stadium in the United States and the third largest stadium in the world. The song was released on Amazon.com and the iTunes store on the 30th of August 2011. The song has also played at the stadium as a pump-up song for the players and the crowd.

In January 2012, the band released their third single from War of Angels called “Boss’s Daughter”and announced their world tour with Theory of a Deadman in April & May.

On the 6th of April 2012 due to personal reasons Tony Greve quit the band of his own accord and Nick Fuelling stepped up to fill his shoes.

On the 24th of April 2012, it was announced that the band would join the “Trespass America Festival”. The tour ran from the 13th of July 2012 – 28th of August 2012. In May 2012 the band released the video for “Boss’s Daughter” which features appearances by Mick Mars from Mötley Crüe and Playboy Playmate Jessa Hinton. The single reached Number 8 on Active Radio Charts.

In June 2012 the band’s fourth single from War of Angels “Purple” was released. In October 2012 the band made their first appearance touring in Canada with Black Label Society. In November 2012 the band performed one tour date in Sweden with Seether and Avatar.

In 2013 the band entered the studio in Chicago, IL with producer Johnny K just after New Year to record their thirs studio album. The first single called “Trenches” from their upcoming album “Onyx” debuted online on the 28 February 2013. On the 11th of April 2013 the band debuted a second single from “Onyx” called “Goodbye My Friend”. It was announced via Twitter that on the 3rd of March that “Onyx” will be released on the 14th of May 2013.

In June 2013, Pop Evil achieved their first national #1 on Rock Radio with the single “Trenches”.

In February 2014 the band signed a deal with Eleven Seven Music for distribution of their current and forthcoming material in Europe. This will see “Trenches” released on the 17th of March 2014 and the album sometime in the first half of the year. In addition, their first European live dates will be in support of label mates Five Finger Death Punch from March into April. 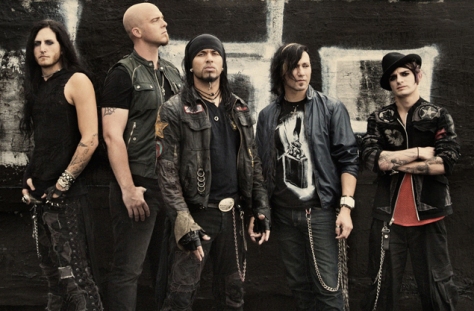