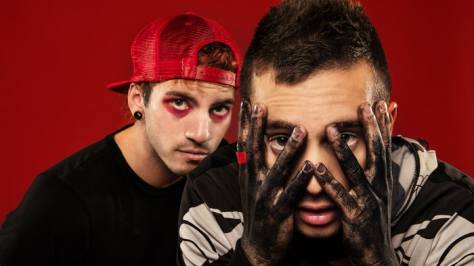 There have been many opinions about which genre Twenty One Pilots fall into, but I believe that music doesn’t always need to fit into a specific category. As long as you enjoy the music you are listening to, does it really matter? I think music genres are just a general guideline used to describe what type of music we prefer to listen to. I decided to feature Twenty One Pilots, because I think rock fans tend to forget that rock music isn’t just about how many riffs and guitar solos one can fit into one song. Rock music is about attitude and standing out from the crowd as well. I feel TØP are a very unique band and they have a beautifully awkward demeanor when they perform.

Twenty One Pilots are an American musical duo hailing from Columbus, Ohio. The band was formed by Tyler Joseph in 2009 along with former members Nick Thomas and Chris Salih. Nick and Chris left the band in 2011. The band currently consists of Tyler Joseph and Josh Dun.

The band was formed in 2009 in Columbus, Ohio by college friends Tyler Joseph, Nick Thomas and Chris Salih. The band’s name originated from a 1947 play by Arthur Miller called “All My Sons” based on true events about a man who has to decide what is best for his family after causing the death of twenty-one pilots during World War II, because he knowingly sent them faulty parts for the good of his business. Tyler explains that this story of moral dilemma was the inspiration for the name of the band. On the 29th of December 2009, they released their self-titled debut album Twenty One Pilots and started touring Ohio.

In 2011, Thomas and Salih left the band due to their busy schedules, both posting farewell notes on the band’s Facebook page. Tyler was joined by Josh Dun, former drummer for House of Heroes.

The band’s second self-release Regional at Best was released on the 8th of July 2011, the first album with the current line-up. The album release was accompanied by a free show on the grounds of New Albany High School. In November 2011, they played a sold out show at Columbus’ Newport Music Hall attracting the attention of a dozen record labels. It was ultimately decided that TØP would sign to Atlantic Records’ subsidiary label Fueled by Ramen.

During 2011 the band gave fans two unreleased songs for free via their newsletter, the original version of  “House of Gold” and “Two”.

On the 11th of February the band released a music video for as yet an unreleased song titled “Goner” was rewritten and re-recorded for its release on Blurryface in 2015.

During a sold-out show in April 2012 the band announced their signing to Atlantic Records subsidiary label Fueled by Ramen. On the 17th of July 2012 the band released their debut recording under the new record label in the form of a three song EP, entitled Three Songs. In August 2012 the band embarked on a short tour with Neon Trees and Walk The Moon. They worked with producer Greg Wells on their first full-length album with their new record label titled “Vessel”.

The duo had their first charting single on radio charts in America with “Holding On To You” which reached 11 on the Billboard Alternative Songs chart. On the 12th of November 2012, the official music video for “Holding Onto You” was released on YouTube. In 2013 music video for “Guns For Hands” and “Car Radio” were uploaded respectively  on the 7th January and on the 19th of April.

In 2013 Twenty One Pilots toured as a support act for Fall Out Boy on their Save Rock and Roll Arena Tour. On the 8th of August 2013 performed their song “House of Gold” on Conan for their late night debut and the video for the song released on the 2nd of October.

In 2014, Twenty One Pilots played a number of music festivals and other events all around the country, such as Lollapalooza, Bonnaroo, Boston Calling and Firefly. As a result they took show requests from different cities and blended them into the Quiet Is Violent World Tour which began in September 2014 and ended in the same year.

On the 31st of December 2014 the duo released their music video for “Ode To Sleep”.

It was announced in March 2016 that the band would be releasing “Blurryface” on the 19th of May 2016. The first single released from the album was titled “Fairly Local” and the second single was called “Tear In My Heart”. The third single “Stressed Out” was released along with the music video. “Stressed Out” peaked at number 2 on the U.S. Billboard Hot 100 chart and number one on both the Alternative Songs and Hot Rock Songs.

The band began the Blurryface World Tour on the 11th of May 2015 in Glasgow, Scotland. The U.S part of their tour started on the 8th of September in Washington, D.C. They toured with Echosmith and Finish Ticket and the tour continued into the United States, Australia, South East Asia, Japan and Europe. Twenty One Pilots performed “Stressed Out” on “Late Night With Seth Meyers” on the 14th of September 2015.

As the duo grew more popular, they turned down record deals with signing bonuses, acted as their own roadies long after they were selling out large venues, and refused to trade in their van for a touring bus. Recently they’ve declined significant sponsorship offers for their 2016 tour.

The band began their Emotional Roadshow World Tour which started in Cincinnati on the 31st of May 2016.  The tour will go through the United States, Canada, Mexico, Europe and Australia with Chef’Special and Mutemath joining them on tour.

On the 16th of June 2016, Twenty One Pilots released the first single from the official Suicide Squad soundtrack called “Heathens” and the music video for the song released on the 21st of June 2016.

Watch the music video for “Heathens”:

TØP became the third musical act to have two singles simultaneously chart in the top five of the Billboard Hot 100 joining The Beatles and Elvis Presley, also becoming the third duo to accomplish this.

Twenty One Pilots are a unique band that have created a strong brand by reinforcing ideas, imagery and performances. This is how they have differentiated themselves in the music industry which is an incredibly hard task, especially in the current economic climate and considering how connected everyone is in our current day and age. 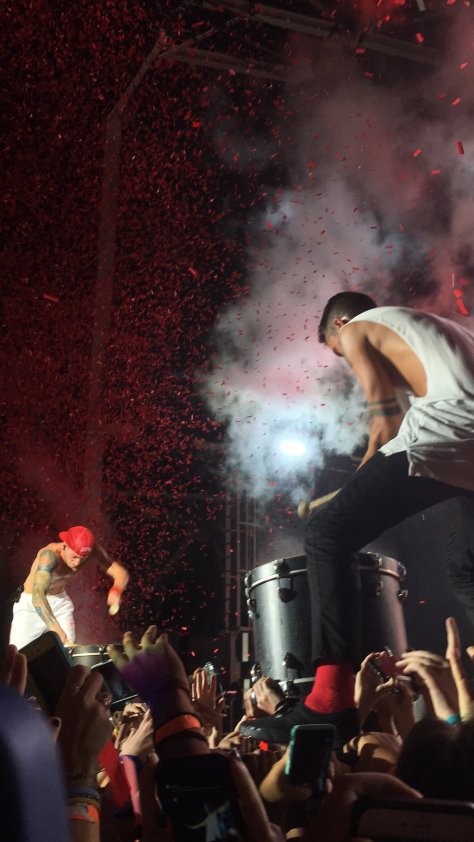