The Rock Riff on FB 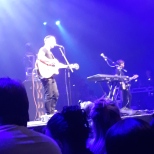 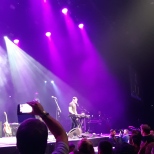 I arrived at the venue 2 hours prior to the start of the show and going through the motions that is required by a dedicated music lover. This includes queuing for what seems like forever, standing for hours on end, feeling exhausted the following day and having body aches for the next 48 hours. It really sounds like I’m complaining a lot, but my point is, all of that is worth it through and through.

Jesse Clegg kicked off the evening with some favourite local tunes and it was the first time in two months that he has been back in South Africa. The venue means a lot to him, because of his father, Johnny Clegg’s history of performances at the Grand Arena.

Jesse proved that he could captivate the audience with the subtlety and honesty of his performance.

Jesse ended his set at 20:30 and the crowd waited with bated breath for Daughtry to take to the stage. In the meantime there was some entertainment in between sets which the crowd thoroughly enjoyed. The audience members in the Golden Circle had no idea what was happening, but the seated crowd got entertained by a man who could not resist dancing to Michael Jackson’s “Beat It” which was blaring from the speakers. The crowd who could witness his smooth moves, couldn’t stop cheering for him.

Daughtry finally came on stage and by this time the anticipation had been palpitating. Unfortunately I’m not able to access the set list, so I will recall the songs that were performed from memory. The band kicked off with a song from their latest album titled “Just Found Heaven“. A very intimate song, which describes the narrator being so happy that he found a special relationship, that he doesn’t care what happens to him when he dies.

“Feels Like Tonight” is about a person who made a mistake and has made a decision to make up for it at that moment.

I have to say that an unexpected highlight for me was Daughtry’s performance of “Battleship“. Chris delivered the vocals so passionately and with so much energy, I was completely mesmerised.

“Crawling Back To You” seemed to be quite a hit with the crowd and it was amazing to hear it live. The band really shined on this track.

One of my favourite tracks from the band’s “Cage To Rattle” tour, has to be “Backbone” the lyrics hit home and the melody of the song is on point! The timing of the track feels different to the band’s other material and I find that the song makes quite an impact, which the listener can’t deny.

“Deep End” is the band’s latest single off their new album, it is about taking a chance on love or a new relationship by going “all in”. Elvio shines on the keyboards on this track and it has a feel good quality to it. 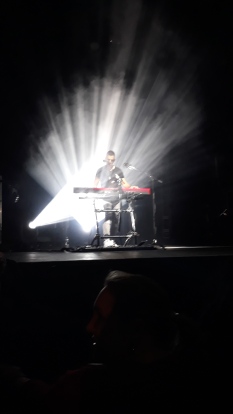 After that, Chris moved on to an acoustic set, with just him and the guitar on stage. A classic Daughtry track “Life After You” kicked off the acoustic set and it feels as if you just heard the lyrics for the first time in your life, because of the way it is being delivered.

“As You Are” is a track from the latest album and Chris revealed that his wife wrote this song with him. It is about true love, dedication and having to accept your significant other as they are in order to make it last. It is about appreciating the other person too.

Chris encouraged the audience to sing along with one of Daughtry’s first singles when they started out, “Home“. It was a beautiful moment as the crowd got out their phones to light up the arena. My phone was terribly confused as it kept going out of focus, but I think I captured the “feel” of the performance at least.

The band took it up a few notches after the acoustic set by performing “White Flag“, a hard-hitting, energetic rock song delivered with power and conviction. I loved every second of the band’s performance of this song.

Daughtry entertained the crowd with their performance of “It’s Not Over“, the song that catapulted the band into the charts. It’s not a Daughtry show, if this song is not on the set list.

“Over You” followed after and the crowd got an opportunity to show off with Chris allowing us to fill in the blanks, so to speak. It is about the narrator getting over a tough breakup and coming out stronger on the other side of it.

The band left the stage after that and we cheered for an encore. 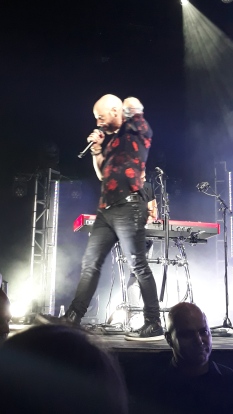 The audience members beside me in the Golden Circle had been anticipating the performance of “Waiting for Superman” the entire evening and the band finally performed it. I never realised how popular the song was among fans until now.

We provided the backup vocals for “No Surprise” and Chris layered his vocals over it, it sounded incredible.

“September” was performed thereafter and the crowd lapped up every note of that song.

The best surprise was when Chris suddenly launched into a cover version of “Purple Rain“. It stunned the audience into silence for a few seconds, before that turned to screaming. Chris left the stage at one point and the band continued playing the song, when Chris suddenly returned much to my delight after having caught that moment on video. It was a surreal moment in the best way possible.

I watched Daughtry performing in Cape Town exactly 8 years ago, so it was really special to have the opportunity to see them again. Adding to that it was the first concert that I had ever been to. I really hope it won’t take another 8 years for them to return.

I have to say that I had the most pleasant Golden Circle experience ever. I had enough space to stretch my legs and no one pushing against me the whole time.

Chris’s vocal abilities are hard to compare to anyone else, he has a powerful set of pipes. That doesn’t mean I take anything away from the band’s performance. Josh Paul is always entertaining to watch on the bass guitar. Elvio Fernandes provides some impressive backup vocals and he is great on the keyboards. Josh Steely is on lead guitar, Brian Craddock on rhythm guitar and together they make a great team. Brandon Maclin played his part on the drums and even provided us with a short drum solo.