Congratulations to Halestorm for winning the Grammy for Best Hard Rock/Metal performance for Love Bites (So Do I). I’m so proud of them, “Here’s To Us”!!

A great moment for rock music!

Halestorm has been nominated in the BEST HARD ROCK OR METAL PERFORMANCE category for the 2013 Grammy Awards!

Lzzy Hale is the first female to nominated in this category. I really hope they win the Grammy, but either way to be nominated is a huge honour!

You can vote for Lzzy in the Loudwire Music Awards here: http://loudwire.com/rock-goddess-of-the-year-2012-loudwire-music-awards/

Vote for Halestorm in the Loudwire Music Awards:

http://loudwire.com/drummer-of-the-year-2012-loudwire-music-awards/ – Drummer of the year

http://loudwire.com/vocalist-of-the-year-2012-loudwire-music-awards/ – Vocalist of the year

http://loudwire.com/rock-band-of-the-year-2012-loudwire-music-awards/ – Rock Band of the year

http://loudwire.com/rock-album-of-the-year-2012-loudwire-music-awards/ – Rock Album of the year

http://loudwire.com/live-act-of-the-year-2012-loudwire-music-awards/ – Live Act of the year

http://loudwire.com/rock-song-of-the-year-2012-loudwire-music-awards/ – Rock Song of the year

I just had to share the latest videos from Halestorm.

They are such a talented band and these series of videos just reinforces that statement.

To view the full list of videos go here:

Today I would like to feature Halestorm in my blog post for Band of the Month. I predict that they are the next big thing to hit the rock world. They are a relativley new band since they have only released 2 studio albums and 1 live album. I first became aware of Halestorm through numerous tweets about Lzzy Hale from Brent Smith‘s Twitter account (Lead singer for Shinedown). They have become quite close I assume because they have toured together in the past and the fact that they share a record label. I decided to keep an eye out for them in the future.

So I surf the internet quite a lot and at the end of the month I scour Youtube in search of good music. I have watched numerous videos of Halestorm and slowly but surely I began to warm to their music. Their music is loud with no-holds-barred lyrics combined with a frenzy of drums performed by Lzzy’s brother Arejay.

Personally I feel Lzzy is a woman I can look up to, she is feisty and strong, she follows her own instincts and she isn’t afraid to say whatever she wants. Added to that she has a killer dress sense and can rock just as hard in the rain as she can in sky-high heels.

Both Lzzy and Arejay started learning to play piano at the young age of 5. Lzzy later progressed to keytar and Arejay to drums. Lzzy started to attend guitar lessons at the age of 16. Lzzy is 3 years Arejay’s senior. Guitarist Joe Hottinger joined in 2003. Originally Lzzy and Arejay’s father Roger played bass before Josh Smith joined the group in 2004.

Their self-titled debut album was released on April 28, 2009. Their first single ” I Get Off” is a rowdy, cheeky rock song that is a really solid introduction to the band and their style. They later on released 3 more singles off of their debut album and 4 music videos. After that they released ReAniMate:The Covers which featured covers of various genres including the impressive cover of Lady Gaga’s Bad Romance. You can listen to it here:

“Their second full length album, The Strange Case Of… was released on April 10, 2012 in the US,April 9 in the UK, and April 17 in Italy. In May 2012, Halestorm made history by becoming the first female-fronted band to top the active rock airplay chart with their song “Love Bites…(So Do I).” In the same month, Gibson Guitars created a signature series guitar for Lzzy Hale.” – Quote Obtained from Wikipedia.

In their quest for writing new material for their second album Halestorm wanted to add more depth and variety to their songs as well as to their lyrics. Halestorm started off by writing the fast, gritty and energetic Love Bites (So Do I) and after that Lzzy penned more fast, hard rock songs topped off with soaring vocals. After a personal setback Lzzy wrote a vulnerable and tender song and recorded it using her cellphone and sent it to the album’s producer, Howard Benson. He liked it and asked Lzzy to write more intimate songs. So after that the album had quite a few hard hitting songs and very soft, intimate songs which they soon realised sounded a little schizophrenic. Lzzy then wrote Mz. Hyde which tied the album together and became an expression of Lzzy’s split personality.

Halestorm has become well-known for their constant touring with a variety of bands including Disturbed, Shinedown, Godsmack, Stone Sour and more recently Evanescence to name a few. This has given Halestorm quite a lot of experience and the band is gelling better than they ever have before. I believe that there is no reason why Halestorm can’t move from strength to strength from here on out. Become acquainted with Halestorm, because they are here to stay!

Here is the official video for Love Bites (So Do I) from Halestorm’s Official Youtube Channel:

Lzzy Hale taken at the Carnival of Madness by Rob Fenn 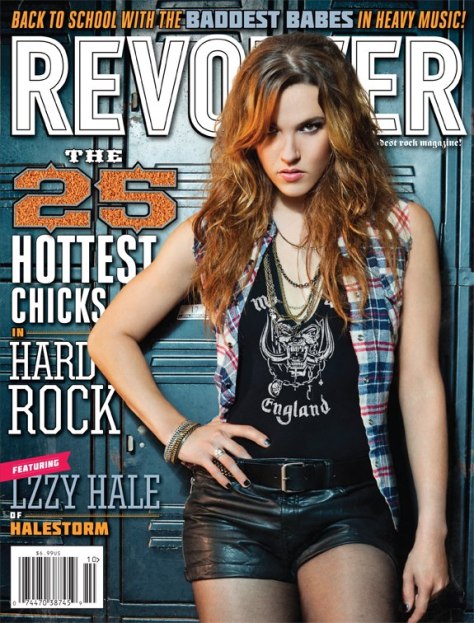 I became aware of Rob Fenn’s photography when I saw some photos he took of Shinedown which was posted by Shinedowns Nation’s blog (http://wp.me/1Gy1Q). I was impressed by his skills, but never really saw any of Rob’s other photos that he took of other rock bands. Eventually I saw a competition that was advertised by Shinedowns Nation on Facebook. You could enter to win 1 of 10 Limited Edition Frames of Brent Smith plus some other Shinedown goodies. Its still running if you’re interested: http://www.facebook.com/#!/MusicThroughTheLens/app_403359706360567

I took a peek through all 10 photos and I was dumbfounded. All 10 of those photos capture Brent’s passion for music and his intensity on stage. I realised I had to find out more about this fantastic photographer.

“Rob Fenn’s photography career started in 2009 when he borrowed a camera from his friend to shoot Avenged Sevenfold in concert. After experiencing the rush of a live show, Rob was hooked and ready to make concert photography his life’s passion. Two years later, Rob was on the Rockstar Energy Drink Uproar Festival tour with Avenged Sevenfold capturing their live show.” -Quote from Rob Fenn’s LinkedIn profile.
“Rob founded a book project titled ‘On The Road…Where MUSIC Lives’ after realising that his daughter’s idea of a record store was purchasing music from iTunes. Rob’s daughter was given the opportunity to buy one album a week of her choosing. The only rule is it has to be a full album from a store. This has turned into a great bond between them, and let them both discover new music together.” Quote taken from http://www.facebook.com/#!/MusicThroughTheLens/info

Rob Fenn has a passion for continuing the tradition of purchasing physical albums and for people to go to a record store to purchase their favourite music. Later this year Rob will be releasing a 376 page hard cover photo book that will be for sale in record stores ONLY with part of the proceeds going to charity to fund music programs in public schools. I really admire Rob’s passion for the music industry and his concern for the future of music. Rob is using his experiences on the road to motivate people to appreciate music more, to admire the musicians and their talent. Through his new endeavour he is aiming to make music an experience and not something you purchase just to fulfil an immediate need which will later be discarded after the fad has passed.

Rob is currently attending the Carnival of Madness and is on tour with Halestorm.

Below are examples of Rob’s work, I do not claim ownership of any of these photos.

I absolutely love this photo of Lzzy Hale and Joe Hottinger from Halestorm by Rob Fenn.

This is such an epic photo of Brent Smith from Shinedown by Rob Fenn. This is such a strong pose from Brent, wow! 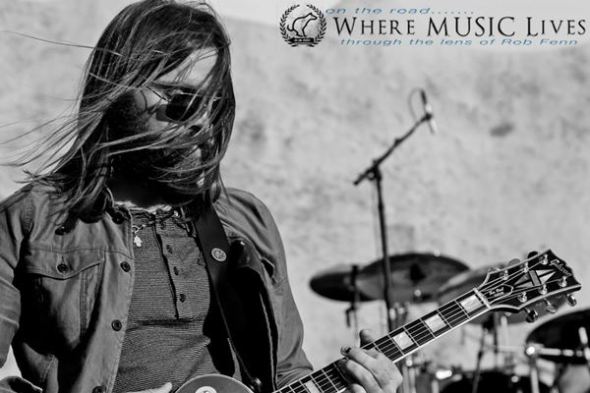 Great photo of Chris Traynor from Bush, such a graceful capture from Rob Fenn. 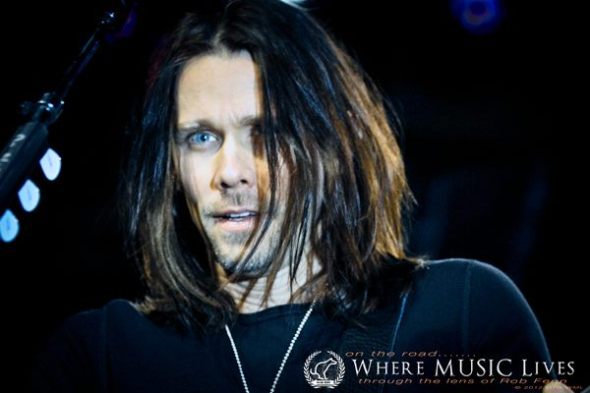 Obviously this collection wouldn’t be complete without the talented Myles Kennedy from Alter Bridge and Slash featuring Myles Kennedy and the Conspirators by Rob Fenn.

So I couldn’t leave out Slash in my Rob Fenn Highlight Reel. Do you know another man who can pull off wearing a belly ring and silver hoop earrings? I don’t, so pictured here is Mr Cool and Calm himself, Slash performing with Lzzy Hale from Halestorm by Rob Fenn.

This concludes my Rob Fenn Highlight Reel, if you are looking for some more fantastic photos, which I’m sure you are, then you can Like this page which should provide sufficient eye candy for any rock music fan. http://www.facebook.com/media/albums/?id=110841208993424#!/MusicThroughTheLens

I hope you enjoy my recommendation and support Rob Fenn’s various projects.