Our evening started off with a long walk to the venue, due to the long queues that stretched for meters past the entrance to the casino.

We eventually arrive with quite a good view from the Golden Circle. I was eager to see what the opening band would be like, especially since I know that they have a female lead singer. The name of the band is The Sweet Resistance and they are a South African alternative pop rock band, but the lead singer Tash hails from Canada. They released their debut album in September 2016, titled “Where There Is Hope”.

The band opened up their set and the crowd was silent, trying to gauge the band’s performance. It didn’t take me long to realize that this band was a solid unit and not intimidated by their position as the supporting band for Live’s Reunion Tour.

The band ended their set and I was so glad that I got introduced to them as I would definitely go and watch a performance of theirs if I get the chance.

The crowd naturally couldn’t wait for Live to take to the stage. You could see the happiness on each of the band members’ faces as they came on, grateful to be doing what they are doing, together again.

The band  brought along two touring band members Zak Loy (rhythm guitar) and Adam Diaz (drums). The two drum sets on stage were a real treat and I can honestly say that I haven’t been to a live performance with a similar set-up.

The excitement in the air was tangible as the band opened their set with “All Over You”. The sound was incredible and honestly the best sound quality I have experienced at the Grand Arena.

“Pain Lies On The Riverside” is such a melodious song, due to the skillful layering of each instrument that the band plays and it translates so well during a live performance.

The band performed the ever-popular “Dolphin’s Cry” early on in the set, to my surprise and utter delight. Personally I think hearing this song live alone is an honour and worth every penny of the ticket price. It is such an iconic song of my youth and one of the songs that my generation use to relate to the band.

“Selling the Drama” did exactly that, the breakdown when the chorus hits is magical and it is a great song for the band’s guitarists to indulge in.

Live even treated us to their cover of Johnny Cash’s “Walk The Line”, which was a refreshing addition to their set and certainly one I didn’t expect.

Live performed “Sh*t Towne” which is about the town where the guys grew up and hated it at the time. The excitement on their faces was evident when they played that song and you could see the bond they share over that song. They like visiting their town in the current day, because there is more life there now in comparison to when they were growing up.

“I Alone” has become one of my all-time favourite songs and I can’t get the song to play loud enough. It is a raw and powerful song on all fronts, lyrically and musically. The song emits an energy, which you can only convey when you mean every word of what you are singing. I find that this song is more aggressive in nature in comparison to many of their other songs and it is one that will defy age. I was privileged to witness this song performed live and I couldn’t absorb that moment long enough.

“Lakini’s Juice” is a delightful, gritty piece of music, with that signature rift threaded between the lyrics and drums. A song that hits you right between the eyes and doesn’t let go until the last note.

After another song, the band left the stage and the audience had instant separation anxiety and started chanting for the band to return.

Ed lead the encore on his own for the first part of “Heaven” where he forgot the words to the song, it was an endearing moment and the audience actually seemed to enjoy it. I felt for Ed, but he handled it extremely well and I’m selfishly glad that I caught the moment  on video.

“Run To The Water”, is an invigorating song and one of the highlights of the band’s discography. I always find the song refreshing, because it is about seeking solace.

The band performed a tribute to Chris Cornell with a cover version of Audioslave’s “I Am The Highway” which was touching.

After the encore, the crowd could not wait for the band to play “Lightning Crashes”, because I heard quite a few audience members becoming impatient. Once the band played the first few notes of that song the crowd went hysterical. 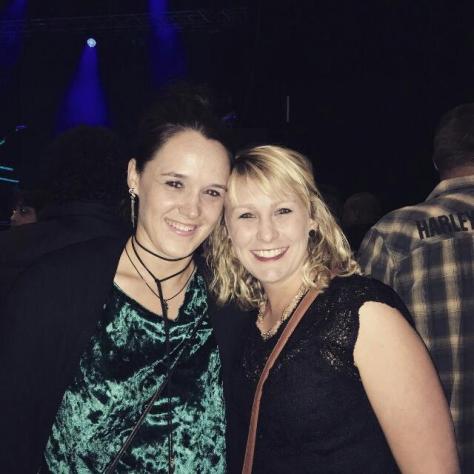 My friend and I at the Live Reunion Tour Concert at Grand Arena, Grand West Casino, Cape Town, South Africa

It was a fabulous night of quality performances!
Rock Regards,
Lauren K